I wanted to leave, but was afraid to, so I found lots of ways to be gone while still sitting up and speaking, and every time I caught a rhythm speaking, I thought I should probably be ashamed, because I am so goddamn loud.

What the fuck.I didn't cook dinner, and then belabor chewing. It would be absurd. Did I ever think, if I enjoy this meal too much, it will expose something, some pitiable defect. It will come out. It will be plain. My teeth will fall out, my whole fucking jaw will fall out.

That's jail, or actually worse, because when someone is in jail, it's obvious who's keeping them there, whereas this was akin to having a wet bag thrown onto your brain, and any thought or feeling gets smothered by some clammy morass where you just sit down to avoid falling.

Well, I could say something. Make something up, like I was swimming. Swimming someplace that really needed me to swim to it. And on the way I could drown. And in my last few seconds of life, I could say to myself I was really swimming, and feel all the rage and bitterness over my failure to swim there, and for a split second, I'd say whoa, fuck this, and throw everything I had into struggling upwards with my hands grasping frantically for the sky immediately above the water.

What an option. Did someone hit me in the head with a board? Am I walking on my own goddamn head? Is my head up my own goddamn ass, and that's where I'm walking to?

Watch this. A magic trick:

I'm holding in my hands a rabbit. Now, et voila, it's a bouquet of flowers. And it's unwrapped. They fall on the floor.

One thousand times, this trick. I need to just say "Ah well."

When I sleep, I see walls smashed apart, but it's not me, just me as a part. When the last one goes, then for just a second, you can see.

What do you do in the face of that? Something got to me and wound me up to escape. If you don't think things through, if it doesn't go well, you don't get far. And further, where the fuck do you run, and will you have to hide there, too?

Life as some embarrassed animal. I worry it's ugly. It is, but it's also real, but so flimsy that it's more embarrassing to fall into the logic where that's the rule.
Posted by Hard Luck Mutt at 1:49 AM

Somewhere on beaches where it would be as foreign
to me, they would be lying on tongues stretched
baking

Platters before a sun which would strip me bare

I want to dig in the sand, deep to the compressed layers,
get into the ground before the ocean sucks
me as I would a clam, its entire body torn on jagged tines
from its hold

All the gulls would yell as they sat near me
and would shut up.
Posted by Hard Luck Mutt at 12:35 AM

For your eyes, only

At their ferocity
and their ability to cover themselves
completely

with this beige blanket

and for a second I
stood there

and this was not a zoo, but a home

If they saw me,
that's what they
should know

They were fiery, tweaking rabbits
in a tent

Or a pulsating,
autoerotic ghost

When they came, I hope someone yelled

The window tells
the end of telling
as it breaks

The land cannot approve
or teach. Water cares nothing
for prophecy

Your love, not your fealty

We will eat, sleep and speak
with others and someday die,
this is all

The last cage standing is your mind

What it seeks to contain
could never be
Posted by Hard Luck Mutt at 2:55 PM

How to Survive a Shipwreck

Become a fish.
Posted by Hard Luck Mutt at 7:55 PM

Yesterday you were singing
and now you are enslaved

The screen turns "help"
into "having a good time!"

Those cowering hiss from sparks
behind teeth

It is now their time

When I am so lost,

the well of my desire to see
all life held as a newborn
it is obvious to care for
inverts,

erupts in caustic smoke and

my own head from my shoulders

and flinging it to the sky
where it explodes in announcement

I have opened myself to the belief
that this is how I will die
Posted by Hard Luck Mutt at 1:26 PM 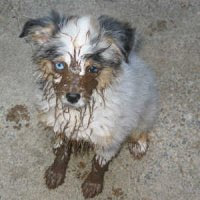